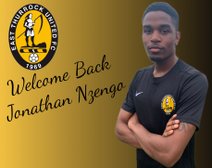 With a return to competitive football now moving closer, new Rocks manager Paul Martin has released details of his first seven signings, as he begins to shape his new-look squad.

As things stand at the moment, two of last seasons side have agreed terms to stay at Rookery Hill, one familiar face returns to the club, and four "new boys" join us.

Dan COSSINGTON. A player who joined John Coventry's squad mid-way through last season and created an immediate impression with Rocks fans. Dan was previously captain of Paul's Romford side before the Glenn Tamplin take over. A solid and composed central defender who can also play in midfield, Dan will now also take on a player/coach role at Rookery Hill.

Ayo OLUKOGA. Another lad who had been with Paul at Romford, Ayo switched to the Rocks at the start of last season to test himself at Isthmian Premier level. It's fair to say he took a few games to adapt, but soon established himself in the side. A skilful and hard-working midfielder with an eye for goal, A great lad, with the biggest smile in football.

Jonathan NZENGO. A third player who is well know and admired by Paul. It was at Romford that Jonathan first caught the eye of John Coventry, who signed him on dual-reg early in the 2018-19 season. Jon soon adapted to playing at National South level and became a key part of the Rocks team. A versatile player, but probably best as an attacking right wing back. Jon surprisingly left the Rocks at the start of last season and became a key member of the Aveley side which reached the quarter finals of the FA Trophy.

Louis BOWEN. Joins the Rocks from Waltham Abbey FC. A solid and uncompromising central defender, Louis has spent most of his recent playing career at step four, and was with Hertford Town prior to joining Abbey. Paul considers he has all the right attributes to step up to playing Isthmian Premier football.

Luke ILLSLEY. Central midfielder who joins from Southern League Chalfont St Peter, where he was very much a fans favourite. Luke had previously been with Enfield Town, Cheshunt and Hertford Town.

Alfie CUE. 21 year old Alfie is a product of the Dartford FC academy. Very much admired by long serving Dartford manager Tony Burnham, Alfie made his National South debut for the Darts as an 18 year old. Spent time out on loan at Leatherhead and at Hitchin Town who he joined on a permanent basis during last season. Equally at home as an attacking left sided midfielder, or as a striker, Paul Martin is expecting him to make a big impression at the Rocks.

Callum TAYLOR. Talented young left wing back who spent time with Royston Town and Grays Athletic before joining ambitious Southern Leaguers Welwyn Garden City last season. Callum was a key player in the City side which was challenging for the Southern Central title when last season was curtailed.

In announcing these signings, Paul Martin told Rocks Online "I'm really looking forward to working with these lads. I'm not rushing into making signings just for the sake of it. I will be patient, and sign the right type of players who I think will suit our style of football"